This week I'm thrilled to welcome a new face to The Naughty Pages; welcome Zillah Anderson, here to talk about her release through No Boundaries Press, Knocking Down Heaven's Door! 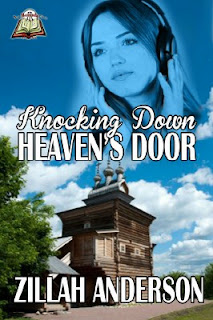 Sometimes stories are begging to be written and you don’t even know it. The inspiration for Knocking Down Heaven’s Door came from a contest a DJ at a local classic rock station was hosting on his blog: write a story about summer camp and use certain key phrases. Now, I’ve never been to camp, but there was something about the combination of the concepts of “classic rock,” “summer camp,” and “forced interaction with others” that really appealed to me. It also brought out my inner disenchanted youth.
Being a teenager isn’t easy, and writing this story brought back a lot of my own experiences. I never felt part of the group. I never knew what was going on. I liked what I liked, and it never matched up with what was cool. While my parents weren’t quite as antagonistic
about my likes, I will admit that my taste in music didn’t match up with anyone else in my age group. And like my lead character in this story, I may have gotten in heaps of trouble for accidentally exposing a very young relative to Bowie’s ‘Rebel, Rebel.’
Even though I haven’t experienced the same things as Layla, I remember all to well how it feels to be disappointed and left out. For whatever reason, I felt like I was taking back a little of my own by writing this. I also made the decision to not beat around the bush and tackle hard issues: religion, sex, social interaction, teen anxiety…these are things kids deal with. . Issues like these aren’t going to go away and they’re not exclusive to one age group. These are things young people actually do think about, whether they admit it or not. They’re people who have real concerns and real worries Instead of polishing them up and hiding them behind vampires, love triangles, and the rest, I wanted to confront the actual issues head-on, and hopefully still make things appealing to readers of all ages. Adolescence is a double-edged sword, and I wanted to explore all of that. We don’t know where we’re going as kids (we don’t know as adults, either, but let’s not tell the teenagers that). Things that may seem so cut and dry one day are confusing the next. Yet as poignant as these years can be, they’re also downright hilarious. Let’s face it: looking back on our teen experiences and angst…they’re pretty hilarious.
I cringe every time I stumble across my teen angst journal (and wonder why I don’t just burn it already). I laugh like a fool when I read through old yearbook entries and remember the little dramas that don’t matter so much anymore. Yet so many of these silly things were part of something deeper, of my growth into an actual human being. I still have my sense of humor and my same taste in music, I still don’t have life figured out, but now I can at least reflect on those cringe-worthy years with a grin and somewhat fond memories. I can’t help but think that writing this story helped me get there.

Blurb:
Remember when everyone else thought they knew you? Remember when everyone else thought they knew better?
Layla’s a small-town teen trying to be herself and is misinterpreted at every turn. She’s not popular because her dad’s a minister and her interests never seem to match those around her.
She’s learned to keep to herself and her music – big mistake. When her love of classic rock makes her parents wonder if she’s “getting ideas” she finds herself shipped off to church camp.
There she’s faced with horrible food and her day is planned out by the millisecond. To make matters worse her bunkmate is the cheery, tow-the-line sort and Donna, her nemesis, is at the same camp and is determined to make things hard for her. The only thing Layla has left to cling to is her music, but when her interests and character are challenged will her faith in herself and her shaky trust in something more be strong enough to see her through?