Another Promo Monday rolls around, and this time, The Walls Have Ears! That's right, Erika Pike is here to talk about her new release through No Boundaries Press!


The Walls Have Ears (College Fun and Gays #3)
by Erica Pike
Published by No Boundaries Press.
Length: 15,000 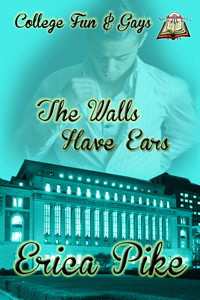 When Harley's roommate (Ryan) is asked out on a date by one of his neighbors, Harley is devastated that his wall-mate mistook not-hot Harley for super-hot Ryan. Helping Harley through his heartache is Tasha Novokov, the other neighbor, who is tall, dark, and impossibly handsome.

As Harley's affections shift to Tasha, his heartache hits an all time high because with all the girls hanging around, Tasha has to be straight.

Excerpt:
The walls have ears, or more like, the guy on the other side of the wall has ears…and a lovely voice. His moans are deep and sensual. They drive me nuts every time I masturbate to his grunts, like I’ve been doing almost every night since moving in.
I had been dreading going off to live with some stranger in the deep, dark forest that is Philadelphia. The rustle and bustle of city life was scary for a small-town boy like me. It didn’t help that the people I knew, who’d been to Philly, took great joy in stuffing my head full with stories of serial killers, mobsters, and nasty dorm mates. That last part scared the hell out of me, because I was a green-horned little girly-guy. I was sure I’d be pushed down and fucked by the first guy to cross my path. Of course, the idea of being fucked wasn’t all that unappealing, but I didn’t want to be made into the dorm’s butt boy or anything.
Naturally, nothing of the sort happened and I really hit the jackpot with my roommate Ryan. We don’t really run in the same circles. It’s not that he wouldn’t hang out with me if I asked; it’s just that he’s a very busy guy with his sports and other multiple after-school activities. The guy is so busy he barely stays in our small dorm apartment, so it’s almost as if I have it all to myself, which is another plus.
However, it isn’t Ryan who’s moaning so deeply on the other side of the wall. There’s a whole living room-slash-kitchen area between mine and Ryan’s rooms. No, the neighbor is one of the two smoldering hot guys who live in the apartment next to ours.
On my first night here, I was just about to fall asleep on the wooden bed, under my green comforter, when I heard these low, sexy grunts coming from the other side of the wall. He wasn’t alone. In between his deep groans were low gasps and moans coming from another guy. My cock immediately perked up at the sweet sounds. I jerked off as quietly as I could and came hard just about the time the owner of the deep voice did.
There were more nights like that. The guy had a lot of partners, and sometimes it was just him alone. Lately it’s just been him and me. See, one night, about a month ago, we were both getting off on each side of the wall. When he let out a particularly long and sensual groan, my own voice slipped with a low moan. I practically heard him stop for a few seconds, but then he continued and groaned again, only a little higher this time. I was curious, embarrassed, and thrilled all at the same time. Instead of stopping, I kept at it and let out an experimental moan. My neighbor’s voice grew louder and from the sound of things he was definitely masturbating. We ended up fisting our cocks, vocalizing our pleasures with moans, groans, grunts, and gasps until we climaxed. I hid under the comforter after that with a mind spinning like a hula hoop. I thought he’d want us to talk and that would only get me embarrassed, but he never said anything. We did, however, repeat the game every night after that.
With knees pressed in the thick mattress, I lean my head against the red wall with labored breaths. I yank on my cock so fast my vision goes blurry. He breathes equally hard on the other side. His forehead bumps against the wall, right against mine with only the thin wall between us.
“Fuck,” I whisper when the wonderful tightness in my balls gathers in a knot.
He groans deeply in response, which coaxes out a moan from me just before I cry out my groin-twisting ecstasy. His lovely voice lets out a series of deep grunts as he comes. We know each other’s voices so well now that we automatically tune in on each other’s rhythm and almost always come at the same time.
After my boneless body slumps down on the bed, I reach for tissues to wipe myself off. My neighbor runs his fingers along the wall and rustles about, maybe wiping himself off too or getting comfortable on the bed. When all is quiet again, he strokes the wall and whispers good night to me.
“Good night,” I murmur back just before curling up and dozing off.


Available at No Boundaries Press, Amazon, All Romance eBooks, and Barnes & Noble.